All About Garage Door Openers 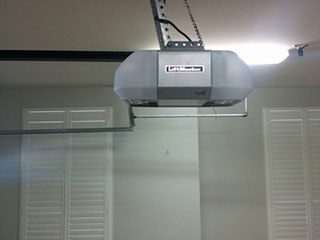 Opening and closing a typically large and heavy garage door is made so much easier and convenient with the use of door operators. With the aid of this very useful electromechanical machine, anyone is now able to move a heavy wooden, glass or metallic door out of their way with a simple push of a button. Their use makes operating garage doors so convenient that almost everyone who has a garage now has an accompanying remote controlled opener.

The belt drive garage door opener is often the most recommended of all the types because of the low noise levels that it emits when compared with the other two. By using a belt made mostly of rubber rather than a chain made of clunky metal, this particular type of opener sounds much quieter during the opening and closing of the garage door. If you do hear some noise, it's probably from the door itself and not from the opener. The use of a belt also has the added benefit of the drive assembly running very smoothly and working perfectly well with less vibrations relative to one using a chain drive.

The chain drive garage door opener is simply one of the most reliable and most popular openers available in the market. It's an economic version of the belt driven model. In many respects, it works in much the same way as its quieter counterpart. The chain driven version is after all the prototype. Since it uses metal chains, it naturally emits louder and more metallic sounds as it functions. If you have an attached garage, don't decide immediately to get this type of opener without first weighing the cons of the much more disruptive sounds that come with its metallic chains as it may be the cause for many restless nights.

The screw drive garage door opener is probably the least favorite of many, though it does have its advantages. One of its most prominent features is its lack of observable moving parts. This is a plus for some. Unfortunately, this lack of visible motion doesn't necessarily mean decreased noise levels since the racket it produces is comparable if not worse than that of the chain model.

What to Consider When Buying an Opener

One type of opener may be better than one or both of the remaining types in terms of a specific aspect or task but the choice will still boil down to personal preferences and individual needs. One of the most important considerations is noise. Many homeowners base their decision solely on the amount and intensity of the noise generated by an opener while it's operating the door. This may seem like a narrow way of looking at things but if everything else pertaining to the different drives were equal, then generated noise levels seem like a very sound basis for choosing one over the other two. Of course, aside from this, another very obvious basis would be your budget and the price of the product. Still another important consideration is the type of garage you have. If you have an attached garage, then you're better off getting the quieter belt drive so you won't disturb anyone sleeping in the room above or adjacent your garage. Screw drive and chain drive openers are ideal for detached garages that most likely don't require the same level of gingerliness when operating the door.

Have any questions? We can help! Please leave your contact information below and we will get in touch as soon as possible.

Our professional team is where you should look for the finest quality repairs at budget prices. We offer dependable, same-day service and guaranteed customer satisfaction!

* $29 service call - deducted from the service

Please fill in your details below:

The appointment was scheduled successfully!

Our technician will contact you before arriving. Until then, feel free to browse our website! Garage Door Repair Lino Lakes is at your service!